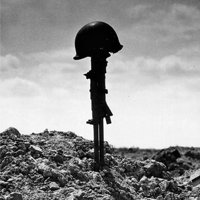 The 27th Marine Regiment was activated on January 10, 1944 as a result of the massive increase in the Marine Corps during World War II. The regiment first saw action during the Battle of Iwo Jima. During the course of the battle they suffered 566 killed, 1,706 wounded and had 4 Marines receive the Medal of Honor. After the surrender of Japan the regiment was inactivated on January 10, 1946.

The 27th Marines was again reactivated during the Vietnam War on January 1, 1966, but was mainly used as a pool for new replacements before they went overseas. The 2nd and 3rd Battalions were stationed at Camp Pendleton, CA. The 1st Battalion was at Marine Corps Air Station at Kane'ohe Bay in Hawaii. During the Tet Offensive in 1968, President Lyndon B. Johnson authorized an increase in U.S. troop strength in South Vietnam and the 27th Marines was one of the units sent. The 27th Marines became the first Marine regiment to fly into a combat zone. Their deployment overseas put a severe strain on manpower in the Marine Corps and they were returned to the United States before the close of 1968.

A homecoming parade was presented as a Memorial Ceremony downtown San Diego to the lives the regiment had given in Vietnam. The unit was then reassigned to MCB Camp Pendleton within the area of the base called Camp Margarita or the 33 Area.

TogetherWeServed.com (TWS) contains comprehensive military records of Military Veterans posted by the Veterans themselves including memories and photographs In addition to its military records search capability, TWS is the largest online community of Veterans existing today and is a powerful Veteran locator. TWS enables Veterans to find those they served with by matching their service information entered on their TWS Military Service Page with the service information of all other Veterans in its membership. TWS members can then review matching members and connect with those they know. Many Veterans try to locate people they served with to re-establish former friendships, but in some cases to also find witnesses to events that occurred during their service for medical claims purposes. TWS has a membership of 2,196,590 Veterans and thousands of Veterans join its ranks every month, therefore increasing the possibility to find old service friends.